‘Bionic Woman’ gets leg up while hiking Appalachian Trail 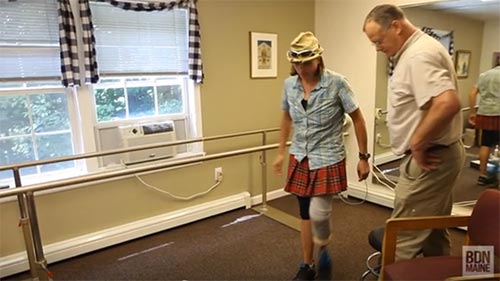 There’s no way around it: She’s slow.

That’s a tough reality to accept for Rellon, who in her 40 years on this planet has been a world-class boxer, a kickboxer, a swim racer, a ski patroller, a competitive snowboarder vying for the 2018 U.S. Paralympic team, a yoga practitioner, a rock climber, a cross-continent bicyclist, and in 2006, one of the relatively few extreme athletes in the world who has through-hiked the Pacific Crest Trail.

“Now everyone is faster than I am,” said Rellon on Monday. “I’m used to not being passed by anyone.”

Across the miles, she’s learned an important lesson: Keep putting one foot in front of the other. That isn’t so easy now that one foot is made of titanium.On Nov. 1, 2013, Rellon was climbing a rock face in Utah when tragedy struck. Her climbing harness unraveled and she fell 45 feet. She shattered most of her ribs, and broke her sternum, her spinal cord and her pelvis, which for a time was held together with steel rods.

Her left leg was so devastated that she told doctors to just “take if off” below the knee. The months that followed were a blur of surgeries, painkillers and for someone who has logged more than 20,000 miles criss-crossing North America on a bicycle, the agony of staying put.

“Every day was the same. I was going into the stages of depression,” said Rellon, a German-born Colorado resident. “Exercise, rehab, yoga, physical therapy. After a while I was able to come up with excuses not to do it. I decided to walk to recovery because I didn’t like myself anymore after my accident.”

On March 9 of this year — 14 months after that fateful fall — she took her first steps on the Appalachian Trail’s southern terminus in Georgia. If she finishes, she will become the first woman with a leg amputation to ever through-hike the trail — and as far as she knows the first person to do it unaided. Rellon is going it alone, and so far she’s accomplished about 1,200 miles of the 2,180-mile trek.

Rellon averaged more than 40 miles a day on the Pacific Crest Trail; on the Appalachian Trail she’s lucky if she can cover 12 miles in a day.

“I had no idea when I started that it would be a record,” she said. “I just wanted to go for a long hike and walk to recovery. I don’t want to prove anything to anybody. I just wanted to be the way I was before the accident.”

Rellon is a “flip-flop” hiker, meaning she started in Georgia and walked about halfway north before flying to Maine and starting atop Mount Katahdin for the journey south. She’ll finish somewhere in the middle.

Some of the hardest challenges so far have been right here in Maine. She hiked Katahdin on a 90-degree day but ran into trouble when thunderstorms and 80-mile-per-hour winds struck her near the top. The blasts of air knocked her over several times before she conceded to the danger and called to be rescued.

She and the ranger who saved her had to crawl on their hands and knees at times to avoid being blown over. They reached the bottom about about 1:30 a.m.

Then, weeks later, after going through the notoriously rigorous 100 Mile Wilderness portion of the trail, the stump of Rellon’s left leg began to hurt. She’d lost roughly 25 pounds during her journey and the fit of her prosthetic leg became loose.

Her skin chaffed and infection threatened. For the last two miles before she reached the trailhead in Andover, her pain was a nine on a 10-point scale.

“I was hiking with tears in my eyes,” she said. She had plans to fly to Denver to have her doctor refit the leg, but that’s where “trail magic” and a team of “trail angels” came in.

Jami Morton, an employee at Sound Limbs Orthotics and Prosthetics of Lewiston, had been following Rellon’s progress on Facebook and just hours before the hiker was to board a plane for Colorado, Morton suggested she could have the work done here. Sound Limbs and an Ohio company called Willow Wood donated most of the labor and materials to re-fit Rellon with a new prosthetic leg.

“She needed some help with her prosthetic leg, and because of where I work at Sound Limbs, I was able to help her out,” said Morton on Monday, as technicians made tweaks and adjustments to Rellon’s leg.

Wade Bonneson of Sound Limbs, who did most of the work, said it takes the average person a couple of weeks of return visits to have their prosthetic fitted. However, he acknowledged that Rellon is not average.

“It’s who the person is that makes the prosthetic work or not,” said Bonneson. “It only works if the person has a great attitude about life, and Niki certainly does.”

A few weeks ago, she was toiling through some of the AT’s toughest terrain, right here in Maine, when she crossed paths with Scott Jurek, an ultramarathon runner who broke the Appalachian Trail speed record in July. There was no conversation between them.

“He couldn’t stop,” said Rellon. “He had to beat that record.”

Rellon is scheduled to restart her journey on Wednesday morning, when she will be dropped back at the trailhead in Andover. With about 1,000 miles left on her journey, she estimates she’ll finish in four or five months.

With the end of the Appalachian Trail moving closer, one foot in front of the other, Rellon has grown used to her “Snail Trail” personna, although most people call her by another name: The Bionic Woman.

Is she concerned that part of her prosthetic leg, which carried her so far, won’t finish the journey? No.

“The new leg has the same foot,” she said. “Never give up. There is always a way.”

Rellon’s journey is being supported by donations from around the world, including on a website called crowdrise. To make a donation, visit crowdrise.com/oneleggedwomenwantstohiketheappalachiantrail.